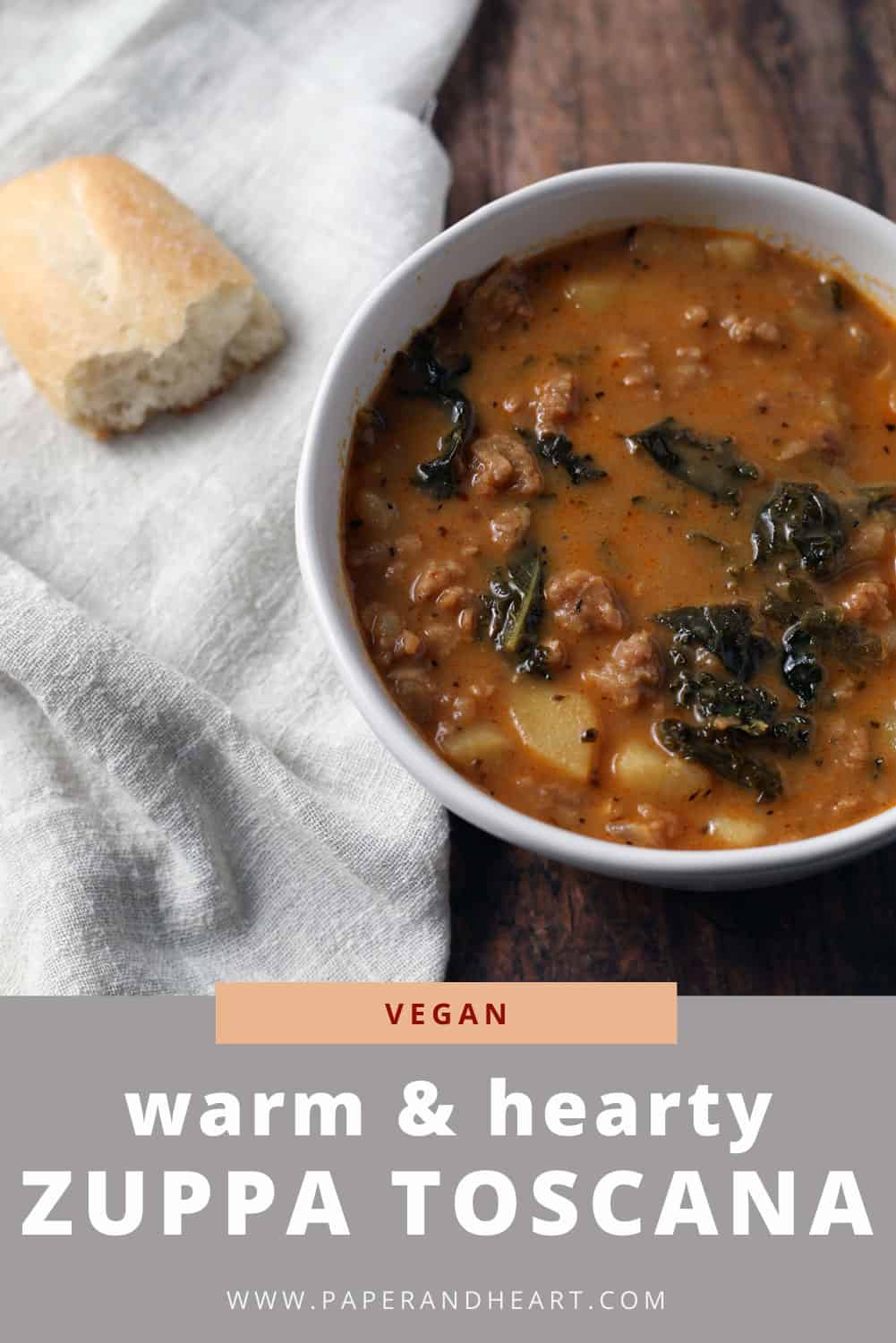 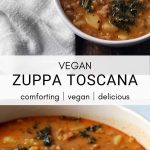 This hearty vegan soup is like a cozy warm sweater for your soul! Inspired by a popular chain restaurant offering, this vegan zuppa toscana perfectly pairs with some crusty bread for a cold weather comfort-fest.

Cook up a pot of this soup on a cold or rainy day and your stomach will thank you.

In a dutch oven, heat oil over medium heat and then add the vegan ground sausage, dried spices and vinegar. Use a spoon to break the sausage apart as it cooks for 5-6 minutes or until cooked through and browned. Then remove the sausage from the pan and set aside.

Heat more oil in the pan and add onions. Saute for 5 minutes until they are softened, then add in the minced garlic and cook another 2 minutes stirring often.

Pour in the broth, or if using cubes add hot water and broth cubes. Bring to a boil and then add potatoes and cook for 15-20 minutes until they are almost cooked.

Reduce heat to a simmer and stir in the coconut milk, cooked sausage and kale. Let simmer 5-7 minutes until the kale is wilted and tender.

Serve with crusty bread and enjoy!

What if I don't have vegan ground sausage?

You could skip it altogether, but I would substitute with some minced up Tofurky or Beyond sausages. Or rehydrated tvp or soy curls would also work. You could even use a vegan ground beef product.

We think that the coconut flavor in the soup is barely detectible. It's likely because all of the spices overpower the coconut flavor, but if you are really averse to it you could try to replace it with 1 ½ cups of an unsweetened vegan creamer product.

This keeps well in the fridge for a few days in an air tight container and can be reheated in the microwave or on the stove.

This soup wouldn't be a good candidate for freezing because potatoes tend to get grainy when frozen.

This hearty vegan soup is like a cozy warm sweater for your soul! Inspired by a popular chain restaurant offering, this vegan zuppa toscana perfectly pairs with some crusty bread for a cold weather comfort-fest.

Share this ArticleLike this article? Email it to a friend!
Email sent!
We use cookies to ensure that we give you the best experience on our website. If you continue to use this site we will assume that you are happy with it.Accept