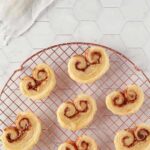 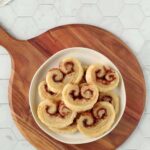 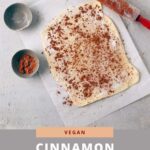 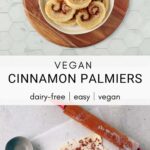 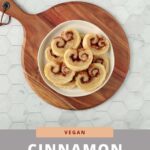 These vegan cinnamon palmiers are easy to make and smell heavenly. Flaky puff pastry is sprinkled with cinnamon and sugar and then baked to crispy sweet perfection.

If cinnamon isn't your jam then try these vegan raspberry palmiers instead.

Thought to have originated in France, the word Palmier translates to palm tree. They are sometimes also called elephant's ear or couer de France (heart of France), but many cultures have a similar pastry that go by different names.

If using frozen puff pastry, let it thaw per the package directions. Then roll out to a 12" x 8" rectangle on a sheet of parchment paper.

Then sprinkle a thin layer of sugar over the pastry.

Then sprinkle all over with cinnamon.

Start rolling the pastry towards the center stopping at the halfway point.

Then start rolling from the other side until they meet in the middle.

Wrap the rolled up pastry in the parchment and place in the freezer for 10-15 minutes. This will make it easier to cut.

Preheat your oven to 375 degrees

Then remove from the roll from the freezer and cut into ¼" pieces.

Place the parchment paper and cut pastries on a baking sheet and sprinkle with additional sugar. Bake for 15-18 minutes.

Remove from the oven and allow to cool on the baking sheet for 5 minutes before transferring a cooling rack.

Many puff pastry brands are in fact vegan. Check the label, but Pepperidge Farm and other brands use oil instead of butter.

Can I use different filling ingredients?

Definitely. Try chocolate with hazelnuts or vegan cream cheese and strawberry jam. Get creative with it or keep it simple.

These vegan cinnamon palmiers keep well in an airtight container on the counter for a few days.

I have not attempted to freeze these.

These vegan cinnamon palmiers are easy to make and smell heavenly. Flaky puff pastry is sprinkled with cinnamon and sugar and then baked to crispy sweet perfection.

Share this ArticleLike this article? Email it to a friend!
Email sent!